Be one of the first 10 customers to purchase the new Lifetime Netball system on buylifetime.com and get 40% off the regular price! (One system per customer.)  Lifetime Products has added the unique game of Netball to its line up of basketball hoops so don't miss this introductory special. The Netball system is not like any other basketball hoop. It is designed with a portable 10 gallon base, a telescoping pole that adjusts from 7.5 to 10 ft, and a 15" rim, but unlike other basketball goals, it does not have a backboard. That makes it much more challenging to get the ball in the net! 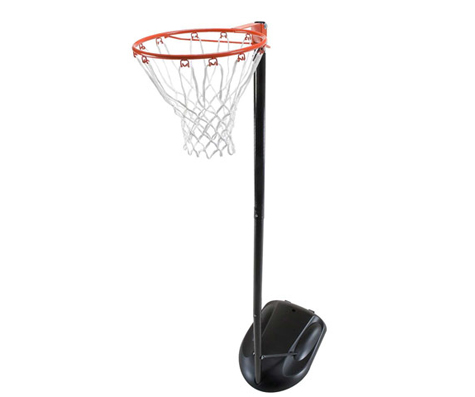 The game of Netball was derived from early versions of basketball. Some of the differences between the rules of basketball and netball are:

BBALL: Players are free to go where they want on the court
NETBALL: Players are assigned to specific positions, which define their roles within the team and
restrict their movement to certain areas of the court.

Be one of the first 10 customers to purchase the new Netball system from buylifetime.com and take advantage of this 40% discount! (Remember, just one system per customer.) Just enter "netball40" at the online Check Out. This offer starts on 04/03/2013 and only lasts until the first 10 systems have been sold, so don't miss out! If you would like assistance in making this online purchase, please contact one of our friendly sales representatives at 1 800 424 3865 or email buy@lifetime.com.

Backyards Inc., The Official Outlet Store for Lifetime Products, recently supported a very deserving family on Good Things Utah, by donating some Utah-made products from Lifetime Products!  Good Things Utah's viewers nominated the "Makeover My Backyard" winner, The DeYoung family from West Valley City, in Utah. They have endured some rough life challenges, including the mother Emily being diagnosed with Lupas and a glass-littered lawn from the previous owners. Backyards Inc. was a part of a team of Utah companies that ca...

Who will win the 2014 World Cup Final? Germany is the favorite to beat Argentina Sunday, but if you have ever watched arguably the best soccer player in the world, Lionel Messi for Argentina, I’m not so sure.  I personally wouldn't bet against a team that includes Messi. It would be like betting against the Chicago Bulls teams when Michael Jordan was still playing. With soccer and the MLS becoming more popular in the U.S.A., the World Cup this year has been a big deal in America (Did you see all the fans at Grant Park in Chicago?). The U.S. team’s first World Cup match, a 2-1 victory, was ESPN’s most w...