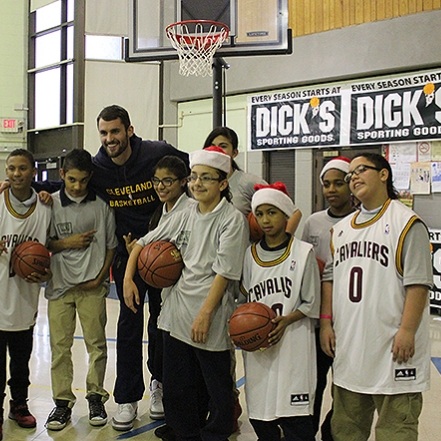 CLEARFIELD, Utah - In the spirit of giving a "Gift That Matters" this holiday season, The DICK'S Sporting Goods Foundation has partnered with Lifetime Products to celebrate #GivingTuesday by launching a #HolidayHoops campaign. During a surprise appearance by Cavaliers star Kevin Love at a Cleveland elementary school, The DICK'S Foundation began a pay-it-forward movement that will ultimately result in the donation of 100 Lifetime® basketball hoops to more than 50 organizations in need across the U.S.

Additionally, to showcase the power of sports, a two-minute film was produced; capturing the authentic reactions of onlookers before and after a basketball hoop randomly appears in five locations across Cleveland, Los Angeles, and New York City.

"We are grateful for the opportunity to be involved with The DICK'S Sporting Goods Foundation. It's a wonderful thing to be able to manufacture a product that brings communities and families together," said Richard Hendrickson, President and CEO of Lifetime Products. "That's what Lifetime was founded to do—bring people together."

#HolidayHoops launched at Scranton Elementary School in Cleveland Tuesday, December 2. Each day in December, two participating organizations will be gifted two hoops and then have the opportunity to pay it forward and gift two hoops to another deserving organization. The recipients of the hoops will be announced and tagged with #HolidayHoops on social media channels including Facebook and Twitter throughout the month.

All #HolidayHoops activity is hosted on DSG.com/holidayhoops which includes the film, a U.S. map updated each day illustrating where the 100 hoops have been donated, and social media content captured throughout the giving campaign.

About Lifetime Products
Established in 1986, Lifetime Products, Inc. is a privately-held company headquartered in Clearfield, Utah. Starting in the owner's garage, Lifetime Products began by building a better basketball system. Today, Lifetime is the world's leading manufacturer of residential basketball hoops. Lifetime continues to develop innovative products sold in more than 80 countries around the globe.

5 Things to Know Before Buying a Basketball Hoop