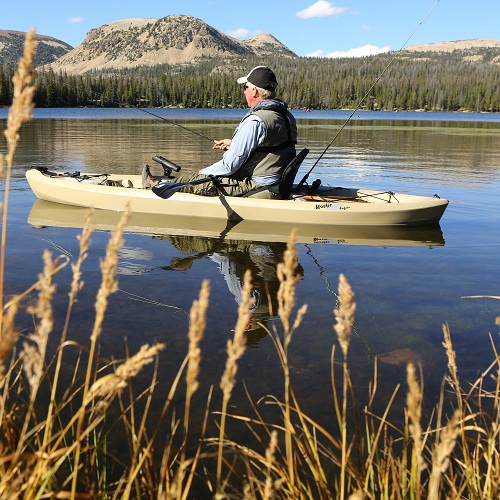 If you are new to kayaking and you have recently been surrounded by some veteran kayaking friends, there is a chance it sounded like they were speaking a foreign language. Fear not, beginner kayaker! We’ll have you up to speed faster than you can say kayak.

Here are some common technical terms used to describe kayaks that are often not heard anywhere else:

Stability: This term refers to how stable the kayak is and how stable it feels.  Can you move around and lean without the kayak tipping over, or does the paddler feel wobbly? The width of the kayak is an important factor effecting stability. Generally, the wider the kayak, the more stable it is. Hull design will also come into play.

Maneuverable: Kayak maneuverability refers to how quickly and efficiently the kayak turns and responds to turning paddle strokes. Shorter kayaks with flat bottoms are often the most maneuverable.

Speed: How fast and efficiently does the kayak move through the water? Longer more narrow kayaks are often faster because they have an ability to slice though the water and create less drag.

Tracking: This relates to how straight the kayak moves. Does it continue in a straight forward motion after you stop paddling? If it does, than it has good tracking. Kayaks with great tracking are often less maneuverable.

Edging: Edging a kayak is something that can take some practice. Edging is described as the ability to rock the kayak from side-to-side, removing one side of the hull from the water. This helps with turning and maneuvering.

Hull: This is the meat of your kayak. Strip away all of the flare and extras and you have the hull. For polyethylene kayaks like Lifetime makes, this will be just the plastic shell: no seat, no added  features. The design of this part of the kayak is what makes it stable or unstable, fast or slow, and everything in between. Here are a few hull related terms:

Flat Bottom: This is a hull style where the bottom is extremely flat and is most often wider. This style kayak is extremely stable and maneuverable but won’t be extremely fast or track as well as other styles. This design is fantastic for beginners. These have great initial stability which means they are perfect for flat water but will begin to feel less stable as the water gets choppy or rough.

V Hull: This design is more suitable for intermediate to advanced kayakers. It is shaped just like its name suggests, like a “V.” This design is much faster and will track extremely well compared to flat bottom and combination hull kayaks. It will be a bit less maneuverable and stable, but that is a compromise for excellent speed and tracking ability. These will feel less stable in flat water but have great secondary stability due to the ability to edge when they are in rough water.

Shallow V/Combination Hull: This is a mixture of the flat bottom and the V-hull. This is still a great beginner to intermediate style. Kayaks with this hull design will be slightly less stable but a bit faster than your standard flat bottom kayak. It will also track better. It’s a great blend of initial and secondary stability.

Rocker: Think rocking horse or rocking chair. Rocker refers to how much the bow and stern of the kayak is affected by the water line. For instance, you can have two kayaks that are the same size but one has rocker and one does not, the kayak with the rocker will have a larger area of the kayak above the water line. Kayak rocker will allow for quicker turning and more maneuverability.

Chine: The Chine describes the part of the kayak that transitions between the bottom and the side of the kayak. The main type of chines you will hear about are hard and soft chines. Soft chines are more rounded and transition softly. There will be no clearly defined side walls, or edges. Hard chines have more defined edges and are generally good for “edging” your kayak.

Tank well: Another name for the on-deck storage area. Some kayaks will also have a bungee or cargo net to accompany the tank well.

Drain Plug: Removable plug found in most kayaks that allows water to drain out from the inside when open.

Deck: The deck is the part of the hull that is above the water line of the kayak.

Cock Pit: The cockpit is considered to be the area where the paddler sits from backrest to foot rest area. This term is more commonly used to describe sit-inside kayaks where the paddler would sit inside, but it can also be used to explain the paddlers sitting area on the deck of a sit-on-top.

Scupper: A scupper is a molded in-drain hole found on sit-on-top kayaks.  There are usually anywhere from one to six scupper holes in a kayak. These are part of the design and are there to drain water from the deck of the kayak. This ensures that standing water doesn’t collect in the cock-pit area of the deck where the paddler sits. You can also get scupper plugs, which are fitted pieces that plug these scupper drain holes for paddling in colder conditions.

Keel: Keels are found on the bottom of the hull of your kayak. The keel will vary in size depending on the design of the kayak. The purpose of the keel is to help the kayak go forward and keep it from turning side to side. A kayak with a defined keel will be faster and track better than a kayak without a large or defined keel.

Rudder: A rudder can be added to some kayaks to make steering and maneuvering easier. A rudder allows the paddler to steer from side-to-side using foot braces that are attached to the rudder in the rear of the kayak. These often require installation. Many smaller kayaks are not produced with the option to take a rudder as they are already fairly maneuverable.

Runable:  Don’t consult the dictionary on this one, it won’t know what you are talking about! While this isn’t officially a word, it is used heavily in the kayak world. Runable refers to whether or not a feature on a river or waterway can be run safely in a kayak. What is “runable” will depend on the kayaker’s skill level, kayak design and on water hazards. For instance, a larger or low head dam found on a calm slow moving river is not a runable feature. See the next definition for what to do when you come across something that is not runable.

Portage: A portage is a common term in the paddling world. Portage is derived from a French word meaning “to carry”.  And, that is essentially what portage means.  It is the act of carrying your kayak on land, around a water feature or obstacle that is not runable, or is above the kayaker's skill level. A good example of this would be if you were on a float trip down a flat river and came across a low head dam. You would want to “portage” the dam.