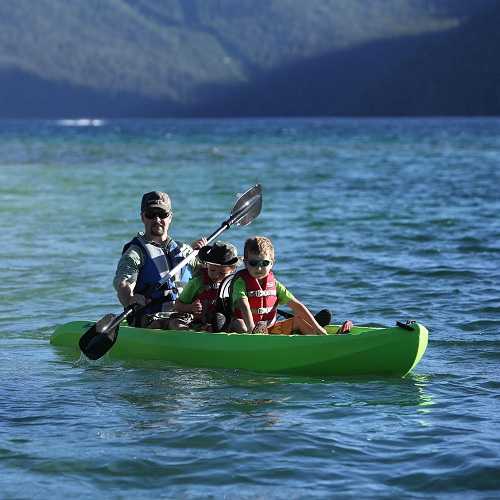 You may think all you have to do to get around in your kayak is jump in and go, but there's actually a little more to aquatic navigation than that. Unlike driving a car, steering a kayak also involves the element of water, which has a personality all its own. Learning the following paddle strokes will enable you to get where you want to go quickly and efficiently. There is a different stroke for every maneuver in the water—going forward, going backward, turning aside, turning around, and coming in sideways.

The first thing to do is make sure you're seated correctly in the kayak: upright but leaning forward slightly. Make sure your feet are comfortably positioned against the built-in foot wells so you can brace yourself while pulling the paddle through the water.

The FORWARD SWEEP STROKE turns the kayak aside, or around, while the kayak is moving forward. Stretching the paddle out horizontally, dip the blade into the water on the opposite side of the kayak from the direction you want to turn. Pull the paddle through the water in a sweeping "c" motion from tip to stern (front to back). Snap blade out of the water and repeat on the same side of the kayak until it has turned in the desired direction.

The KAYAK SPIN is used to spin your kayak around in a tight circle while it is stationary in the water. To achieve this, you will be alternating between the forward sweep stroke on one side of your kayak and the reverse sweep stroke on the other side. Begin with the forward sweep and once it is completed, rotate your body all the way around to do the reverse sweep stroke on the opposite side of the kayak. Continue to alternate between the two different strokes until the kayak has spun into the desired position.

Of course, reading about it isn't nearly as effective as a hands-on experience, so get yourself out on the water and test these moves out. You'll soon get a feel for it and be in total control. Happy kayaking!