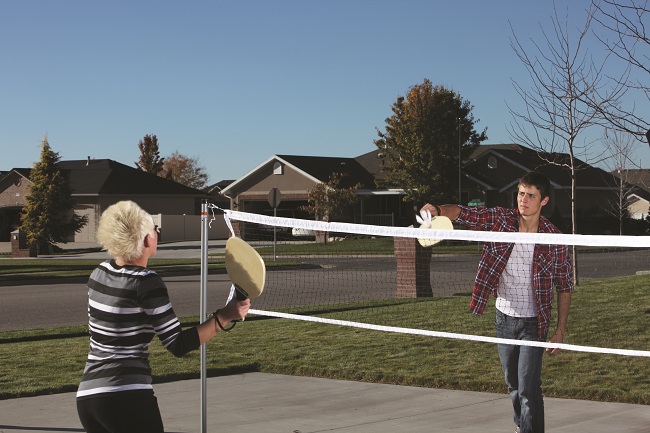 Historical evidence shows the game of badminton probably originated in ancient before spreading to England via British India in the 1860s. At first the English referred to it by its Indian name, "Poona", before changing it to Battledores & Shuttlecocks--battledores being the racquets and shuttlecocks being, of course, the shuttlecocks (or "birdies" as they are sometimes referred to). The original racquets were made of dried animal gut stretched across a wooden frame, and the shuttlecocks were made of a piece of cork trimmed with feathers fastened around the top. It finally acquired its current name after the wealthy Duke of Beaufort hosted the games at a party at his country house of "Badminton" in Gloucestershire. Thereafter, they were called the "the badminton games".

By 1893, an official set of rules was published by the Badminton Association of England, which was similar to the badminton rules we play by today. The first badminton championship competition in the world was held in England in 1899. In 1934, the International Badminton Federation (or Badminton World Federation) was officially established, with countries all over the world vying for the championships.

Lifetime Products has combined all the equipment you need to play the popular game of Badminton, as well as Pickleball and Driveway Tennis, into one handy 3-in-1 Driveway Sport Set. While all of these games are similar in rules and objective, the equipment used varies enough to keep the games interesting--challenging players to develop the skills necessary to handle the different types of balls as well as the birdie. You won't find the typical lightweight badminton racquets in this kit, though, because they are notoriously flimsy. Because we wanted to offer a durable, long-lasting product, the Lifetime badminton game is played with wooden paddles. Consequently, the birdie has been modified to be a little heavier, as well. This kit is an ideal way to introduce younger kids to these sports, but all ages are sure to enjoy the exciting competition that has made these games so popular since the days of the ancient Greeks.