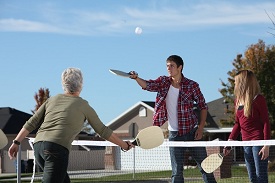 Despite the name, Pickleball does not involve pickles, or anything shaped like a pickle, or even anything green.  The game was invented in 1965 in the back yard of US congressman, Joel Pritchard. He and his buddy, Bill Bell, had to make improvisations to their children's badminton game because they couldn’t find the shuttlecock.  In its place, they substituted a wiffle ball, which is a plastic ball with holes all over it. Then they found it necessary to cut out some plywood paddles because the badminton rackets were too lightweight for the wiffle ball, and they also lowered the net.

Because the game was comprised of spare parts, Mrs. Pritchard said that it reminded her of the crew on a pickle boat which is selected from leftover men, so they referred to it as Pickle Ball. However, despite her official statement, the more popular story in the media is that the name of the game was derived from the inventor’s dog, Pickles, who supposedly would steal the ball during the game and run off with it.  Although they did have a dog named Pickles, he wasn’t acquired until two years after the game was invented.  So while it may not be as charming a story, the dog was actually named after the game and not the other way around.

The rules for Pickleball are similar to badminton.  It’s played on a smaller court using the lower net and wooden paddles and wiffle balls that are similar to the original.  Since its backyard origins, an official USA Pickleball Association was organized in 1984 with tournaments held nationwide. Its popularity is currently spreading into Canada as well as overseas into India and Asia.

While the rules are similar to badminton, there are a few minor differences. For instance, Pickleball is played with a bounce. The bounces are important. The rules for Pickleball are also picky about clothing. If the ball hits any part of the player’s clothing, that player loses the rally.

The game can be played singles or doubles.  The ball is served underhand starting from the right-hand side of the court and is served diagonally.  At the start of a doubles game, the serving side gets one fault before they’re out and the opposing team gets to serve (an act of good will to those of us who need that warm up-shot!).  After that, each side gets two faults (one with each team member serving) before their serve is finished.  So each side is always one serve ahead, behind, or tied. In singles play, each side gets only one fault before a side out and the opponent then serves.  Points can only be scored by the serving side and the first side to score eleven points, and at least leading by two, wins!

See what all the excitement is about by getting your own Pickleball Set from Lifetime Products.  It’s included in the Lifetime Driveway 3 Sport Set, along with everything you need to play Badminton and QuickStart Tennis, too!