What Is Quick Start Tennis? 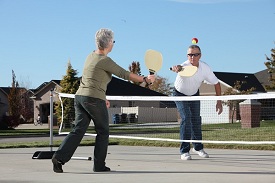 QuickStart Tennis is designed to give kids a good foundation and jump start into the game of tennis.  The United States Tennis Association stated:  "In a decision that will fundamentally change the future landscape of tennis in the United States, the USTA has passed new rules governing competition for 10-and-under tennis tournaments. Studies have found that competition, when conducted in a welcoming environment that allows for multiple play opportunities, enhances kids' enjoyment of the game. And for aspiring collegiate and professional players, the QuickStart Tennis play format fosters proper technique and enhances strategy, key components to success in competitive play."  Great idea!

The Ball—
QuickStart Tennis uses a low-compression foam ball which is larger, softer, and slower than a regulation tennis ball.

The Scoring System—
The scoring system has been modified from standard tennis rules, eliminating the traditional 15, 30, 40, deuce system.

Lifetime Products has put together a fun sports package for kids so they can play QuickStart Tennis as well as Badminton and Pickleball.  The Lifetime Driveway 3 Sport Set comes with an adjustable height net that  can be set up in your driveway or on your patio. Along with the net, it includes 4 wooden paddles, 2 pickleballs, and 2 birdies (rackets not included).  Give your kids a headstart on developing skills they can enjoy for the rest of their lives.