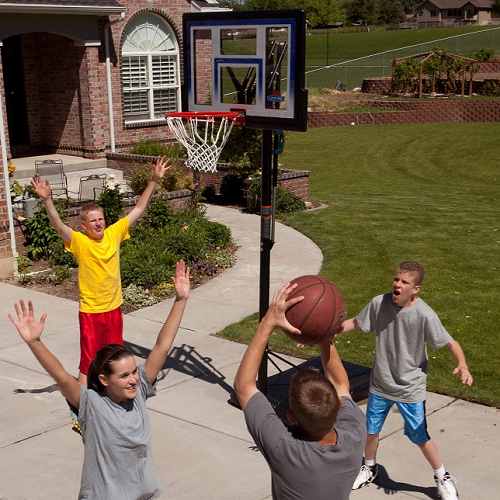 Everyone loves to shoot hoops out in the driveway or backyard. It’s the perfect way to get your exercise, practice your jump shot at home or just blow off some steam. But as much fun as it can be playing alone, it is much more fun with family and friends.

Since Lifetime revolutionized the game of basketball by bringing the game home to you, it would make sense that we are experts when it comes to playing the game it was meant to be played – with family and friends, and at home for fun! Here are our top picks; the most popular Family basketball games you can play right in your own driveway, backyard, or patio.

H-O-R-S-E The game of H-O-R-S-E is an old time favorite that anyone, of any skill level can play. The set-up is simple: you need two or more players, a hoop and a ball. The first player chooses a spot on the court and takes a shot. If the shot is made, the next player must repeat the exact same shot. If the shot is made, the process is repeated. However, if the second player does not match the first player’s shot, then they receive a letter – in this case, an “H.” If the first player misses their shot, then the second player takes the lead shot, and if it is made, the first player must match player two’s shot. And so on. This is repeated until one player misses five shots and receives all five letters that spell out the word H-O-R-S-E! This is a great game to test your outside shot, or even simple layups. You’d be surprised how many times the player behind you may miss a layup! It’s also fun to try the wackiest of shots to see if you can put ‘em away early. Try a “behind-the back” lay-up, a shot from behind the backboard or a shot from way out beyond the driveway. The game can also be altered to a shorter version. This version is usually called P-I-G.

Lightning! Lightning is a game that tests your ability to shoot a free-throw while under pressure. This game is best with three or more players, and is truly more fun with a large group. It requires two basketballs. The set-up is easy: create a free-throw line at any distance you like (the regulation free-throw line is 15 feet (180 inches) from the backboard). Line everyone up single-file just behind the line and give the first two people in line each a basketball. The first person in line takes a shot. As soon as that person releases their shot, the next person in line can take their shot. The object of the game is for the person taking the second shot to make the basket before the person in front of them. If the first person taking the shot makes their shot, they pass the ball back to the next person in line, move to the very back of the line and the game continues. If the first person misses their shot, they must rebound the shot and make a basket before they can pass it to the next player. However, if the person immediately behind them makes the shot before the first player can make a shot, the first player is out of the game. This pattern follows until all but one player is eliminated. The last player standing is the winner. Lightning is fast-paced, highly excitable and the more players you have, the more fun the game. You can also add more basketballs to increase the craziness, but generally two should do it. This is a game that tests your ability to shoot under pressure and it can leave you quite winded.

Twenty One Twenty one is a simple variation of a game of one-on-one, with the winner being the first player to reach 21 points. It can be played with two or more players, with each player keeping their own score. The game starts with one player starting out with the ball at the designated “three-point line.” This line is pre-determined and is based on how much room you have around your hoop. The game begins when the first player dribbles out and tries to score. The other player(s) tries to stop the first player from scoring. No player has any teammates. The player with the ball may take any shot at any time and if the shot is missed, may go for the rebound and shoot again. If the shot is missed and the defensive player rebounds the ball, the ball must be “cleared” by dribbling beyond the “three-point line” before taking a shot. If the offensive player makes the shot, the defensive player takes the ball beyond the “three-point line” and dribbles out and tries to score. This is repeated until one player reaches 21 points. Scoring rules vary, but the most common scoring method is by awarding two points for a shot made inside the “three-point line.” A player may take a shot outside the “three-point line” and if it goes in, is awarded three points. You can shake it up by allowing free-throws for made shots, giving the offensive player the ability to win the game on consecutive free-throws. All typical basketball rules apply, so if a ball goes out of bounds or a player “double-dribbles,” the ball is given to the defensive player and they must dribble out from behind the “three-point line.” Standard foul rules also apply, so call your own fouls.

Around the World Around the World is a great shooting game that can be played by two or more players. In this game, a player must make a series of shots arranged in and around the key. When a shot is made from one position, the player moves onto the next position, and after making that shot, they move on again. And so on. Every shot must be made in succession in order for a player to be crowned the winner. It’s a great game of endurance and accuracy and can go on for quite some time if you’re not accurate with your shots. The game begins with a designated number of “stops” arranged around the basket. It typically starts at a corner of the key and each “spot” is located in a circular motion around the key. You can mark these spots on your driveway using sidewalk chalk. We recommend five “spots” around the key to begin with. From there, place “spots” at the free-throw line and, finally, underneath the basket. Some may also want to place “spots” outside the key towards the three-point line, but this all depends on the skill-set of the players. When a shot is made, the player moves on. However, if the shot is missed, the player gets one “chance” to take the shot again. If they make the shot, they move to the next “spot.” Only one “chance” is allowed per player, per game. If the player misses the “chance” shot, or decides not to take their “chance” shot, they have to start over. The first player to make a shot from every “spot” on the court is the winner.

All-Star Shootout All-Star Shootout is taken from an old professional basketball exhibition game. The game is for two or more players and involves gathering points by taking shots from different scoring circles around the court. To prepare the court, select 10-15 “shooting circles” around the basket. These should be in different locations and each requires a different level of shooting prowess. Assign each circle a point value (one point for a shot under the hoop, two points for a free throw, three points for a 15-footer in the corner, 5 points for a shot beyond the typical three-point line, etc.). We recommend using a small piece of paper or side-walk chalk to designate each circle and its point value. One player begins with the ball and dribbles to a circle out on the court. If they make a shot from that particular circle, they are awarded the point value given to that circle. Each player is given ten shots and has the option of taking their shots from any circle on the court. After the ten shots are taken, the player adds up their points. The shooter with the most points is crowned the winner. An extra player may stand under the basket and rebound the ball for the shooter, as well as helping keep score. You can also give each shooter a time limit, just to raise the stakes. It’s always fun to create one “shooting circle” with an high point value in a crazy place on the court (behind the basket, across the driveway or patio) to tempt players with the ability to make a lot of points with one shot.