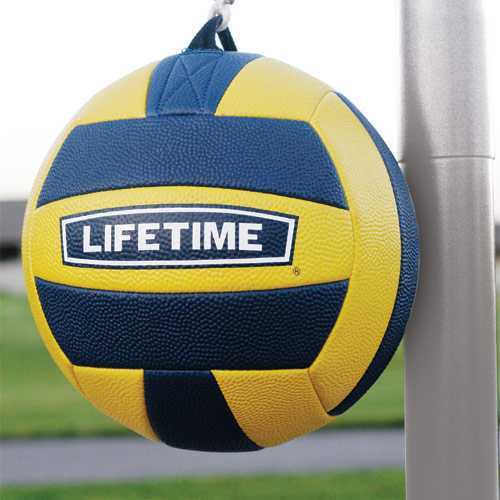 Tetherball brings schoolyard and summer camp fun right into your own backyard. It is fun for children and novices, but provides a competitive challenge for older players as well. A portable tetherball system easily rolls to any space on the lawn or driveway, and because it does not require a cement base, it is quick and easy to setup. With your own tetherball system, you can hold a tournament, form a league or just get a fun workout right in your own backyard.

Tetherball has long been enjoyed on playgrounds and in summer camps across the country, evoking fond memories for the many who have played it. There are various facts about the game and its history, but because of tetherball's recreational nature, few are formally documented. Here are some historical tidbits:

Traditionally, the rules of the game have varied from player to player. There are limited resources available online, but with the introduction of the Lifetime Tetherball system, we would like to present this set of standardized rules.

Set-up: In the most basic form of tetherball, a ball similar to a volleyball is tied to a 10-foot vertical pole by a slender rope.Two players face each other, each confined to one half of the court surrounding the pole, and try to hit the ball repeatedly in one direction so that the rope wraps completely around the pole.

Players: Tetherball requires only two players - one on each side of the court.

Court: The standard tetherball court consists of a 12-foot radius circle with the tetherball system placed in the center of the circle. The circle is divided into two equal halves with a line separating the two halves. Each player will play in one half of the circle. A player is not to cross the center line at any point during the game as this will result in an off-sides penalty (see penalties). If a player steps out of the circle during play, no penalty is assessed.

Games and Matches: A game is won when one player has wrapped the rope as far as it can go in his/her own direction. The outcome of each game is powerfully influenced by which player serves, as explained below. For this reason, a match consist of several games, with the players taking turns at serving. The players can choose how many games must be won to win the match, but the margin of victory must be at least two games; otherwise, the player who serves the first game will be at a disadvantage. Lifetime recommends a five-game match.

Penalties: All violations, intentional or unintentional, result in immediate stoppage of the game. When one player commits any of these violations, the ball is stopped and returned to the place it was wrapped when the violation occurred. Both the number of wraps and their height should be re-created. The other player gets to serve, then either player can hit the ball from that point on. If a player commits three unintentional violations, in any combination, the opponent wins the game. Violations include:

If both players commit a violation at the same time, then they perform a "pole drop". Both players place one hand on the ball, holding it three feet out from the pole, directly above the line dividing the forward ends of their two sides. They release the ball simultaneously. Once the ball hits the pole, either player can hit it, and play continues normally.